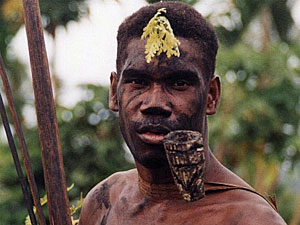 Yes, I want to help produce the first Christian materials in a language like Amblong

The Amblong live in a remote, often mountainous region on the island of Santo in Vanuatu.

Even though Vanuatu is often viewed as a Christian nation, those living in the inland areas like the Amblong are unlikely to have heard a clear presentation of the gospel. Although reportedly 'Christian', these language groups often hold a mixture of Christian and animistic beliefs. Often they have a strong fear of the spirit world and will attempt to placate spirits through animistic beliefs like placing special leaves around their homes. At night certain bird noises can cause fear of spirits.

Language groups like the Amblong desperately need bible teaching in their own language. But as there are only approximately 300 speakers of their language, no bible has yet been translated into Amblong. As far as we know, there are no other Christian materials in the Amblong language.

In order to reach groups and grow a church in a language group like the Amblong, missionaries and indigenous churches need Christian resources in their language.

GRN audio recordings are a lasting gift to language groups around the world. Spoken by native speakers and accompanied by their traditional music, the audio recordings tell them the good news of Jesus in culturally appropriate story and teaching formats.

Our goal is to produce enough materials for hearers to become Christians and active members of a local church.

To find out more about Adopting a Recording Project please contact Mark Hughes in the Australian office.

Or you can give here designating your gift to "Adopt a Recording Project".